These workshops took place during Black History month on February 21st, 28th and March 4th 2017. These workshops were setup  for individuals who wanted to learn, explore and be enlightened through the lens of African spiritual science.

The workshops were  led by High Chief Priest Dr. Ifagbenusola Atanda, holder of prestigious titles of: Asiwaju Awo Agbaye (leader of all the Awos in the world), Akoda Awo (2nd in Hierarchy of the supreme council of Awos in Osogboland) and AARE Alasa of Osogboland (President of the Defenders of the city of Osogboland), President and Secretary, Board of Trustee of the Ancient Religious Societies of African Descendants International Council(ARSADIC) and President and Founder of HATTAF.

Special day for us at the office of the Borough President of Manhattan, NY, from where we could view THE HEART OF THE CITY. ( The President with me, and also at extreme left in the group photograph.

At Amarachi, Brooklyn, where OONIRISA was received. Lots of special food and drinks made the workshop really comfortable . 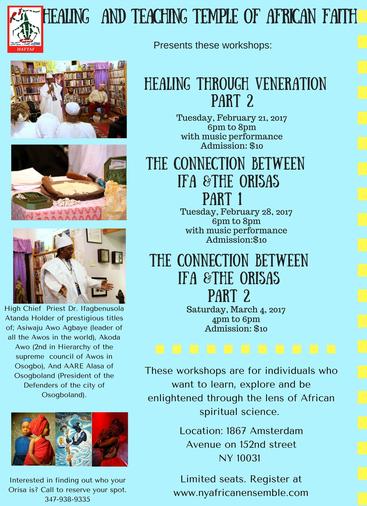 THE AFRICANA INSTITUTE of Essex County College in Newark, NJ, for very successfully hosting " AFRICAN SPIRITUALITY CONFERENCE " March 18, 2017.
Kudos to Dr. Akil Kokayi Khalfani,- Director,of the Institute for the extraordinary efforts that the Deities empowered him to afford

African Spirituality Convention of The 18th March in NJ was great, and we all need to make the future events greater because it's about Us, as Africans and about the World in relationship with Spiritually.r paragraph here.