Originated by High Chief Priest Sola Atanda PhD, in 2001, Sacramento Water Festival has been observed annual at the “DISCOVERY PARK” in Sacramento, California. The festival continues to educate people about the importance of water in our lives and the similar views held about water and the need to protect and conserve this precious element, in all cultures of the world.

The 2019 Sacramento Festival and Conference is an international symposium and festival which has as its theme “Peace & Preservation” will highlight different aspects of fresh water governance as it relates to Agriculture, Business and Innovation, Climate Change, Economic and Environmental Development, Energy, Water Quality, Water Scarcity and Orisa security in the new age of intolerance. The Symposium and Festival will feature paper discussions, special sessions with guardians of Freshwater in Traditional societies, demonstrations, visual arts and performances which will raise awareness about the role of water on earth and our responsibility as dwellers of the land. 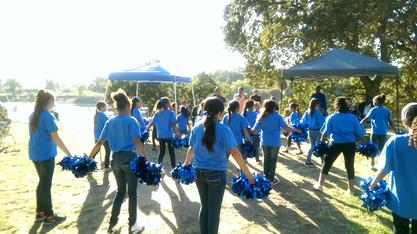 HEREAS, HATTAF International has branches throughout the United States of America, London and Nigeria. It is a peaceful and spiritual organization that recognizes the important effects of water for all human needs; and

HEREAS, water is a necessity for all life on earth both simple and complex organisms; and

HEREAS, without water, there would be no human form on earth and currently there is very little drinkable and usable water on earth; and

HEREAS, Sacramento has brought great recognition to water conservation issues by co-hosting an Annual Water Festival for the people.

OW, THEREFORE, BE IT RESOLVED, by the Mayor and Council of the City of Sacramento, that we do hereby recognize the first Saturday in the month of November as Sacramento's Water Festival Day.

Scholarly sessions, with papers on the importance of water in every area of our lives and the ways in which we can protect and conserve this precious element in all cultures of the world. With the overarching conference theme of Peace & Preservation”, topics will include: (i) Environmental Issues (Nature and Sustainability) (ii) Wellness Issues (iii) Orisa Security in the New Age of Intolerance (iv) Economic and Environmental Development.

Sessions in which composers, performers, film makers and Visual Artists discuss their works, illustrated with live or recorded examples. The emphasis will be on works that raise awareness about the social-economic gains of easing water scarcity in their country and challenges the way the world looks at water.

Special Interactive sessions, which demonstrate, mediate, and/or facilitate intercultural and interfaith relations between Africa and the world.

Notification of abstract acceptance as from October 4th

Direct all questions to hattafintrn@aol.com

CONFERENCE FEE: $200 USD per person
Payment must be made through Eventbrite.

Live concerts featuring local and national and international performers, including food and nonfood vendors, activities for children, art exhibitions, and many more activities and in celebration of Water.

LETTER OF CONFIRMATION TO ATTEND

The initial deadline for letters of confirmation is June 30, 2019; however, this deadline will be extended. This initial deadline is to enable us know the number of participants to plan for, the number of discounted airline tickets we can arrange for participants based on their country of departure, and also arrange for reduced hotel rates in Sacramento. All presenters are expected to provide their own funds with respect to pre-registration fee, local and international travel, food, and lodging.

The brief letter of confirmation must be submitted through Eventbrite by following this link:

THE CASE OF THE WATER FESTIVAL  AT

“When I came to Sacramento, I stayed in the house of one of my god children, on Lotus Avenue, off

Freeport Blvd. One morning, while working out, my host took me to the bank of a river nearby named SACRAMENTO. I immediately developed a profound love for the river. The place became a favorite site for my workout routine.

One day after exercising, I sat by the riverbank to rest and meditate;  my legs were in the river. After a while I removed my legs from the water only to discover that gold particles had formed a chain around my feet. The occurrence piqued my curiosity and I began asking questions about the river.

I later met a friend named Mike who is a native of Sacramento and very knowledgeable about the history of the city. It was from Mike that I heard that the city of Sacramento was named after a woman who performed numerous miraculous healing with the power of water. The woman was called Madam SACRAMENT, hence her city came to be known as SACRAMENTO.  I was also made to know that

Sacramento had the greatest gold mines in California. Sacramento is named and called THE GOLDEN CITY of  California. The city has three rivers namely:  Sacramento, American, and Russian.. It thrilled me to know that two of these three rivers met somewhere. The two rivers that joined together are the Sacramento and American rivers.

During one of the meetings of HATTAF, USA, I told the members all the information I’d been able to gather about Sacramento and I requested to know more. I wanted to know the exact and physical meeting point of the two rivers. I appreciate the singular and great effort of my godchild ,Maia IFALAMI Morton, who took me to the spot - the area called  “THE DISCOVERY PARK.” Anyone who has been to Osogbo city in Nigeria, seen and can recognize the color  of Osun Water, will definitely have something special to say when he or she sees the point at which the two rivers join at the Discovery Park.

Osun water is healing water. Osun is associated with gold. Osun is called AGBARA-AGBO because of the color. These are not simple coincidences. “ORE YEYE OSUN  O!"

Ifa/Olorisa source is one;  therefore we are all one.  Whether you practice Candomble, Santeria, Lukumi, Voodun, or Yoruba Orisa system, we are all one. Let’s come together in the spirit of water. Water has no enemy.”

Celebrating 20 years of creating awareness about the importance of water